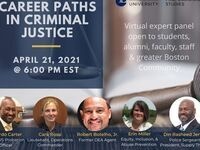 Don't miss hearing from practicing experts who will provide an understanding of criminal justice careers & pathways. The panelists have very interesting career journeys from a DEA agent, Chief US Probation Officer, Police Lieutenant and Sergeant to a TV Show Crime Analyst and Abuse Prevention Officer. Join us to hear about their paths and ask them your burning questions.

See how a Master's degree helped these experts learn the critical and practical skills needed to achieve their career goals.

This event will be held virtually on April 21 @ 6 PM.  So sign up now to hold your spot.

Chief Carter has twenty-five years of experience in the field of adult and juvenile community corrections.  He has spent the last 20 years working for the federal judiciary.   At the national level, his work has created safer communities by designing tools used to evaluate and improve federal probation services nationwide.  He has visited a number of federal probation offices offering recommendations that increase operational effectiveness and efficiency.  At the local level, Chief Carter leads the largest federal probation agency in New England with a staff of 90 in five offices across the Commonwealth. He is passionate about helping others and committed to acquiring the resources necessary to supply critical public safety services to communities throughout Massachusetts.  He is a proponent of evidence-based decision making, organizational problem solving, and the use of evidence-based practices to promote law abiding lifestyle and criminal desistance.

Supply The Why specializes in leadership and cultural development. Supply The Why accomplishes this by providing expert communication by facilitating difficult conversations about a number of topics ranging from Police Use of Force to Race Relations. Supply The Why facilitates these conversations in custom-crafted training sessions and in webcasts that can be found on Linkedin, Facebook, YouTube, Amazon, Apple, iHeartRadio and Spotify via Supply The Why.

As Police Sergeant for the Town of Stoughton, Din is in charge of Training, Accreditation, Public Records, Defensive Tactics & Use of Force and the RAD women's self-defense program. He also teaches Integrating Communication, Assessment & Tactics; MILO Range 2000 simulation and Defensive Tactics & Use of Force for the Municipal Police Training Council. Din is a certified Excited Delirium Trainer. Din is also an FBI-certified Crisis Negotiator and member of the Metropolitan Law Enforcement Council (MetroLEC) Crisis Negotiations Team.

Robert Botelho Jr.is an adjunct professor at Endicott College, Van Loan School of Professional Studies, in the curriculum of International Studies. He also is a Television Crime Analyst for series and specials in the True Crime genre. He has appeared in the Investigation Discovery Channel television special “Vanished in New Canaan”. He will appear in an upcoming episode of the TV One Network Show “For My Man”.Before coming to Endicott, he was a thirty-three-year veteran of Federal, State, and Local law enforcement where he led local, regional, national, and international illicit drug trafficking and narco-terrorism investigations. He served as an instructor for national and transnational crimes of drug smuggling involving the use of various modes of transportation-airplane, bus, train, semi-trailer trucks, and automobiles. He also served as a certified Instructor of Leadership Developmentteaching Sexual Harassment and Equal Employment Opportunity to senior and management level employees across the organization at the United States Department of Justice, United States Drug Enforcement Administration (DEA)in Atlanta, GA. As a Senior Supervisory Special Agent, he served as a Counter-Terrorism Officer and was collaterally assigned to the United States Federal Bureau of Investigation (FBI) National Joint Terrorism Task Force(NJTTF)at FBI Headquarters in Washington DC.

Worked for over six years to grow equity and inclusion work at Newton-Wellesley Hospital, including cultivating internal capacity around the Black Maternal Health crisis, culturally dexterous responses to Latinx, Spanish-speaking, immigrant communities, and structural and policy/practice responses to LGBQ/T patients, This work resulted in the formal creation of an Equity and Inclusion Officer role in 2019.

This event content is powered by the Localist Community Event Platform.

Login to interact with events, personalize your calendar, and get recommendations.